Looking Back and Looking Ahead to 2013

Holy cow, it is kinda scary how fast 2012 went by.  2012 was a pretty big year for me both in my personal life and here at the blog.  I graduated college, got a big boy job and moved into a new place with my lady.  With all that personal stuff going on, it shouldn't surprise that the blog suffered a bit in terms of output.  I didn't manage to crank out as many blog posts as I have in years past, but I'd like to think that the quality of the posts I did produce make up for the slight drop in quantity.

Regardless of how many posts I cranked out, this was by far a banner year for Battle Hymns.  I had the pleasure of contributing my "wisdom" to a couple of other blogs, which was an honor.  I contributed a piece to Sarah's Special Needs in Strange Worlds event at Bookworm Blues and took over the Speculative Scotsman, if only for a day, while Niall was on vacay.

In addition to the guest posts, and single handedly averting the Mayan-pocalypse, (yeah, that was me), I also conducted four author interviews, which has got to be the highlight of this blogging experience for me so far! Check 'em out:

Yep, a pretty awesome year!  Before I start looking ahead, I just want to thank everyone who has made Battle Hymns a piece of their lives.  It's you people who visit, leave comments and all that good stuff that keep me driven and keep me cranking out the blog material.  I hope I give you guys plenty of good reason to keep coming around in 2013!

My shelves are already stuffed to near capacity, but I'm sure I'll plump 'em out even further in 2013.  There's already a few choice items sitting pretty, ready for review, and even more sitting there waiting for my attention.  Here's a little glimpse at what I hope to have in store for the blog in 2013...

I don't often pony up for the brand new stuff, I simply don't have the spendin' money for it.  On occasion however, I'll shell out for a book that I just can't wait to get my hands on. Last year, the big release I shelled out for was Stephen King's The Wind Through the Keyhole, which, given my history with the Dark Tower series, was a fun book to be reading and reviewing around the time of release.  I expect Joe Hill's latest, Nos4a2 will have the honor of being the release I pony up the cash for this coming year.

I've been increasingly impressed with Mr. Hill with each work of his I read. Both his prose works and his works in comics have been great, and I'm hungry for more of both. Lucky for me, 2013 should bring not only his latest prose work, but also the conclusion of his fantastic Locke & Key series.  For that reason alone, signs point towards the fact that 2013 should be a good year, however there's some other good lookin' stuff on the horizon, both new and not so new, that I have my eye on. Here's a glimpse:

The Red Knight: I'm definitely intrigued by this early 2013 release, and I have a copy of it on my Kindle, so expect to see this one get covered here early in the year.

Red Country: 2012 was a Joe Abercrombie-less year for me, and that is sad.  I'll be looking to get my hands on his latest before too long, as I have a hankering for some Bloody Nine.

The Coldest War: I belatedly began Ian Tregillis' The Milkweed Triptych this year, and enjoyed it immensely.  With the second book out and third one due, I'm looking to get a move on in this series.

Railsea: It wouldn't be much of a year if I didn't read something by China Mieville. I'm looking to keep pace with his publications by reading his latest, albeit a year later.

I'm always on the lookout for great new comic reads, but I've had to govern my comics spending more closely lately and limit the number of active titles in my pull box.  However, in 2013, for the first time since I became a comics reader, there's going to be a gaping hole in my monthly comics reading when Sweet Tooth finishes up.  Lucky for me, and every other comics reader out there, we'll see a new Jeff Lemire comic sometime in 2013 in the form of Trillium, a science fiction love story that spans centuries.

While Trillium is sure to make me happy, here's some other titles I'm looking forward to:

Walrus: It's no secret that I'm a big fan of Brandon Graham.  In Spring of 2013, PictureBox Inc. will release a printed edition of his sketchbook.  I'm hoping it will be like a tangible version of his blog, which is a cool mix of comics, and weirdness. 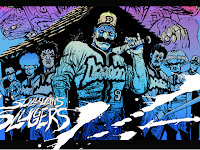 Sullivan's Sluggers: I purchased this months ago on Kickstarter, and still haven't got my copy. I gave them my mailing address though, so I'm hoping I'll see my copy soon.  I've been waiting for this one for months, so I'm pretty excited to finally get my hands on it.

East of West: I've had mixed feelings about the Jonathan Hickman material that I've read in the past, but East of West which promises to be a "sci-fi western set in a dystopian America where all hope for the future rests in the four horsemen of the apocalypse" (quoted straight from the Image website). I dare say from that description that East of West sounds like it is right up my alley.  I'll for sure be checking out a few issues of this title to get a taste for it.

2012 was a bit of a music fail for me, so I hope to make more of an effort to experience more of it in 2013.  That means going to more live shows and listening to more music on a daily basis.  Right now, my work situation is pretty conducive to listen to whatever I want for a good chunk of the day, so that should help.  As  for stuff I'm looking forward to, my fingers are crossed that there'll be a new Red Fang album for me to listen to before the end of the year.

So there you go, a good look at some of the stuff I'm looking forward to in 2013.  And now I turn things over to you faithful Battle Hymns readers: What Books, comics, and musics are you pumped about for 2013? Head to the comments section to let the world know!