Comic Review: Criminal Vol. 3 The Dead and the Dying 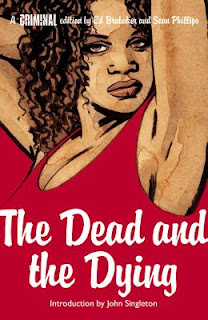 I figured since I was on such a hot streak with the Criminal series, I might as well keep plugging away at it.

This third volume, The Dead and the Dying is a bit different in format from Coward and Lawless as it eschews that straight narrative focusing on one character.  Instead, this volume gives the reader three different character studies; and boxer trying to escape his father's shadow and have a life outside of organized crime; A vietnam vet who returns home to find that the mental and physical survival skills he developed in the war are simultaneously quite useful and quite terrible when put into action in his civilian life; and lastly, a young woman with a bleak past who is trying to steer her life away from a dark path.

The most impressive thing about The Dead and the Dying is how these narratives all overlap, dovetail, and in some cases, clash with each other to create one grand narrative.  The end result is both heartbreaking and an impressive piece of writing.  I gotta say, I liked this separate-but-connected story telling technique. I didn't know this technique would be in play until I started reading the Vietnam Veteran story piece and I noticed the first piece of overlap.  I got that light-bulb effect, and upon flipping back a few pages to the previous character study, pieced a few things together to make the whole story all the more interesting.

Not only do all the stories in The Dead and the Dying interweave with each other, but again, are all threads in the tapestry of the whole Criminal world that Brubaker has created. There were many moments where I made connections from this comic to the other Criminal comics, and I'm really enjoying how each volume builds upon each previous volume to create a decades-spanning mosaic crime story.  I don't often mention world building outside of epic fantasy reviews, but the world building that Brubaker is laying down in these Criminal comics is as impressive as anything I've seen in the fantasy genre.

I do have a major gripe about this volume, and that is how the character Danica is portrayed.  To start things off, I was very much put-off by the cover here.  I feel that it's a classic case of an over-sexualized comic cover. The fact that it's an exotification of a black woman makes it doubly bad.  Then there's this piece of interior art: 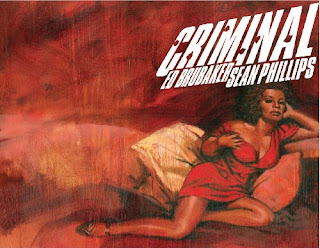 Again with the over-sexualization. And it's not even all that relevant to Danica's story. It seems to say that her sex is the only thing relevant about her. Sure, a ton of comics do this same thing month in and month out, but  it's still a shitty inexcusable trend of the medium, and I just don't see the point here. Especially when Criminal has been a series that, to this point, has been so far above the standard comic fare.

Additionally, there's a lot of violence towards Danica in this comic and I found that it was very upsetting.  Yes, Brubaker and Phillips have crafted a violent and dangerous world in this Criminal series, but Danica's story ended up making me uncomfortable to the point that it jarred me out of the story completely.

Though the writing technique used to tell this story was unique and well done, The Dead and the Dying loses some big time points for it's sexist cover art, and extreme violence towards women that was very disconcerting.

I should note that I haven't experienced anything like this in all the other Brubaker/Phillips comics I've read and I hope I don't experience it again. I was feeling so good about this comic series until things got weird and uncomfortable in the final third of this volume.  I can kinda see how these events could be steered towards developing a certain character as a total fucking prick for the coming story arcs, but if that's the case, I just don't agree with how Brubaker and Phillips went about it. You can show how a guy is a total asshole, sleazeball in other ways.

In the end, I'm pretty damn torn about this third volume of Criminal.  If you're gonna give this one a go, be forewarned that there are highs and lows.

Email ThisBlogThis!Share to TwitterShare to FacebookShare to Pinterest
Labels: comics, Criminal, Ed Brubaker, Sean Phillips, The Dead and the Dying