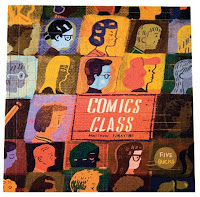 Comics Class: This one was one of my many exciting pick ups from Lucky's Comics in Vancouver.  Exciting enough that I read it at the first opportunity I got: on the bus ride home, with my lady reading over my shoulder.

We both loved it.

Maybe I'm a little predisposed to like Comics Class due to the fact that I work with school aged kids. This fact certainly helped me relate to the material, but there's plenty to like about Comics Class for every reader.  First of all, it is hilarious.  There's a lot of jokes packed into this 44 page comic, enough to get both me and my partner laughing out loud on multiple occasions.

In this "kind of based on a real class" comic, Matt Forsythe, the writer/artist/protagonist takes a job teaching a comic class at a local middle school.  A job which he rides a school bus to, arm wrestles students to prove a completely non-comics related point, and doesn't have his students do any actual comics creating for the first seven weeks.

In an ironic twist of fate, the Matthew Forsythe character in the comic has absolutely no success in teaching his students anything about making comics, However, I felt like I gained insight into making them just from reading the book.

The most impressive thing about Comics Class is that it manages to do so much in such a small amount of space. It is smart, witty, insightful, and a lot of fun to read.  This was the first comic I read in 2013 and I gotta say, I got off to a perfect start. 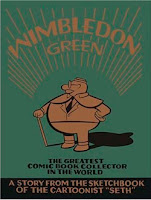 Wimbledon Green: I've been researching and branching out into more indie comics lately, and always two names pop up as must-read creators: Seth, and Chris Ware.  I've read Seth's It's a Good Life If You Don't Weaken and while I enjoyed it, I wasn't blown away.  However, the guy is extremely well respected in the comics medium, so I wasn't about to write the guy off after one pretty good, but not amazing reading experience.

This time around I went for Wimbledon Green, a comic that apparently originated as a comic he did in his sketchbook just for fun, and turned out to be a project he wanted to explore further.  The story follows the titular character, Wimbledon Green, who's an eccentric and avid collector of obscure, expensive comics. The guy is a bit of a mystery, as no one seems to know where he's from, how he got all his money to spend on comics, or even if he's who he says he is.

Regardless, Wimbledon Green has one of the most impressive rare and expensive comic collections around, a collection he's gathered thanks to some shady deals, trickery, manipulation, and possibly even outright theft.  The other comic collectors who act as Green's colleagues and rivals aren't much different in their comic collecting practices from Green.  All together they create a comic that was a lot of fun to read.

Seth's art in Wimbledon Green isn't as polished or as detailed as his other works that I've either read or thumbed through, and the lettering can be a bit hard to read at times.  That being said, I still enjoyed Seth's cartooning, and there's a fair amount of sight gags, jokes and just great cartooning in this comic to satisfy my tastes. 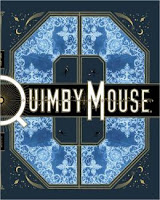 Quimby the Mouse: As I mentioned earlier, aside from Seth, Chris Ware is the name that gets bandied about when folks talk about a modern master of the comics medium.  Despite his preeminence in the medium, his works have eluded me up to this point thanks to either scarcity or the price of the product.

During my most recent trip to the Fantagraphics Bookstore and Gallery I was determined to leave with a Chris Ware book in hand so that I could finally explore his work.  After pawing through his books and inquiring with the shop person, I decided the best place to begin was (surprise, surprise) the beginning.

Quimby the Mouse collects Ware's early works, mostly strips and one to two page comics. Some of which he made while still an undergrad in college.  The comic is printed in a very large format, and has a running gag that the material between the covers is from a discontinued library book.  Using the oversized format to its fullest capabilities, Ware fills up each and every page with either comics or text, and often his panels are postage stamp size or smaller.  This led to two things: I often found myself squinting to either read the microscopic text or view the art, and I found that on many occasions, it would take me 20-30 minutes just to work my way through a single page.  I didn't mind that the pages called for deep immersion, but I wasn't expecting so much squinting given the massive size of this comic.

In the end, all the squinting and eye strain paid off as I was rewarded with a great glimpse at what Ware is able to bring to the table in terms of comics.  His style of cartooning is completely unique, and pops off the page as very eye-catching.  I was also impressed with his ability to create a feeling of motion with his panel art.  In many of the Quimby strips I was able to quickly move my eye from one panel to the next and create the sensation that the art was actually moving, like a flip book or early animation.  All told, it was a cool experience, and I'm excited to explore more of his work in the future.
Posted by Ryan at 1/15/2013 06:11:00 AM

After reading your post, I am looking forward to this. Your post is particular useful, plz keep going.