Well, another year has gone by and that means that Battle Hymns is three years old. I'm pretty proud of the fact that I've been blogging for three years. Battle Hymns has been a fun part of my life, and has opened a lot of really fun, exciting and interesting doors that I never expected. When I got the blog rolling three years ago, I don't think I ever imagined all the awesomeness that I've experienced through the blog. For those reasons, plus all the awesome unread books on my shelves, I'm incredibly excited to get rolling on my fourth year of blogging.

I know I covered a bunch of the readings I'm excited for in 2013 a couple days ago so I won't go over that stuff again, however, I do want to say THANK YOU again.

That's enough tooting of my own horn...for now.  Instead I want the lion's share of this post to focus on the coolest thing I've done in my personal life recently: travel.

Vacations have too few and far between for me lately, so, in order to say farewell to 2012, and to just get away from the regular everyday life of Seattle, my lady and I took a trip to Vancouver, B.C. this past week.  It was a short 4 hour bus ride, but it was my first time outside of the country since May of 2002, and my first trip abroad with my girlfriend, so it was sorta a big deal for us.

Aside from sight seeing and feasting on delicious foods I took a bit of time to turn my vacation into a nerd-cation.  This past fall at work I've been listening to the Inkstuds podcasts with great frequency, and Robin McConnell, the host has mentioned a particular Vancouver comic shop as a great destination for comics lovers multiple times, so I made sure a journey to Lucky's Comics was on the to-do list while in town.  The shop was as great as advertised, and the selection was quite impressive. There were dozens of indie comics in the shop that I'd heard of, but never laid eyes on.  It took a lot of willpower to not drop a ton of money, but I still made out with a pretty great stash of comics. 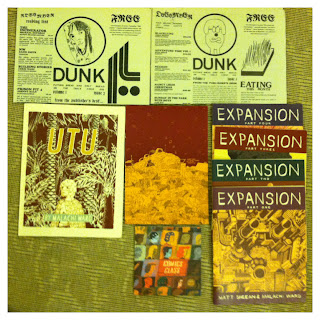 Aside from scoring a couple copies of the shop's own zine, I scooped up every bit of  Malachi Ward comics goodness that the shop had on hand. Not only did they have all four issues of his and Matt Sheean's Expansion series, but I scored Utu as well, which looks pretty cool. In addition to that stuff I also picked up Michael DeForge's Lose #3, of which there are zero copies available in Seattle, as well as the hilarious (I read this one straight away and it was super fun) Comics Class by Matt Forsythe.  There was a ton of other great books in the shop, including an entire section dedicated to Koyama Press titles, a comics publisher that is publishing really great stuff lately.  All told, it was an awesome visit, and I hope to get back someday to buy more great comics.

Now, onto the food, and lovely scenery...

We had a some really great, but chilly, weather while we were there, so the views were fantastic.  I wish I could take credit for most of these pictures, but as usual, I forgot to pack my camera, so my lady did most of the photography.  Probably why they look so nice. 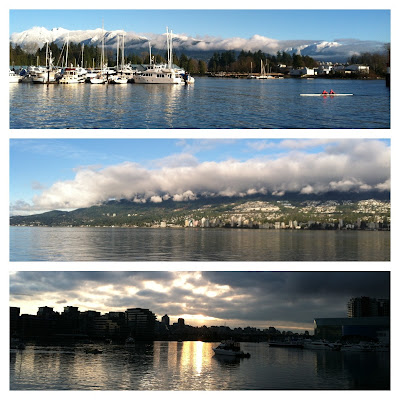 
The best part of any vacation is getting to eat new food, so here's some food pictures:

That was our dessert.


Come to think of it, the poutine was actually a "dessert" as well.  Here's a picture of me impatiently waiting for one of our meals to arrive: 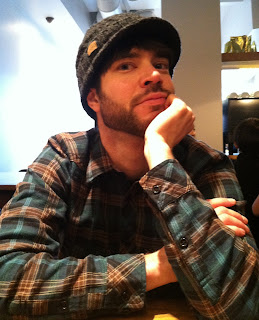 And here's how happy I am when there's finally food close at hand!

We were also in Vancouver for New Years, so I've got a couple pictures of that too.  The New Years  festivities are fairly mellow in Vancouver, but there were still plenty of folks out and about getting their drink and their party on.  Myself included. 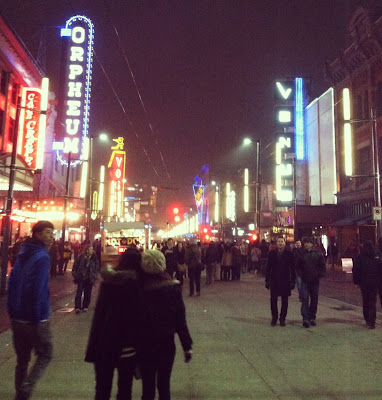 And last but not least. The first picture taken of this guy in the year 2013. Simultaneously the best and worst photo of the year. 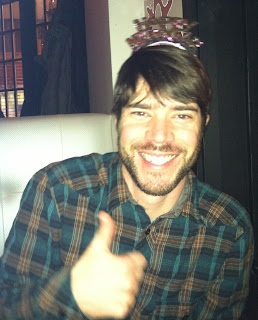 Congrats! Vancouver looks awesome. I hope to make it up there this spring.

Thanks Justin! You should definitely check out Vancouver, it is a cool city.

Happy Birthday, Battle Hymns! Glad you're around and part of the blogging world. Thank YOU for your hard work. Pictures of Vancouver are fantastic- looks like a great time!
-Ivanka

Thanks! I appreciate it!