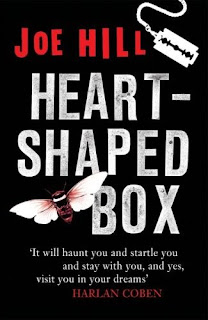 The most recent stop on my quest to devour all things Joe Hill related led me to his first full-on novel, Heart Shaped Box.  Somehow, this one has slipped by me until now.  The title alone, also the title to one of Nirvana's greatest songs, seems to shout that it is a book that will appeal to my inner rock n' roll fan. Then there's the synopsis: Judas Coyne, an aging rock-god (think Alice Cooper meets Ozzy) and collector of the macabre discovers someone is selling a ghost.

A poltergeist will fit in perfectly with his ever growing collection of dark oddities, not to mention, he's already haunted by memories of an abusive father, recollections of former band-mates who are dead and gone, and the lingering guilt he feels for the suicidal girlfriend he abandoned in her time of need. So of course, he buys the ghost. Sooner or later, as these things go, the ghost is delivered to his house, packaged up nice and neat in a heart-shaped box.

This ghost is not hoax either; it sets the dogs barking up a frenzy, casts a chill over the house, and Coyne even starts having visions of an old man with black scribbles for eyes sitting in his living room.  That'd be enough to give any normal man a fear of the dark, but after some digging, Coyne discovers just who this ghost once was, and it's enough to put him on the run and on the search for some closure.

Jesus, talk about a book right up my alley.

Not that the guy hasn't impressed me before, but Joe Hill really rocked my socks off with Heart-Shaped Box.  Sure, what with my love of rock/metal music it may seem like I would have been a little predisposed to like this book, but I actually think my love of rock/metal actually makes Hill's task of making the book seem authentic all the more difficult.  He had to sell Judas Coyne as an aged rock-god, and make him feel like he fits in with the canon of other rock and metal gods, all while ensuring that he doesn't come across as too Spinal Tap-ish. Not only that, but he's gotta make Coyne seem like he's lived the rock n' roll life, but not make him seem like some washed-up VH-1 reality star.

I greatly appreciated that Hill did not take the easy route and make Coyne out to be just some caricature of the pop culture rock-star stereotype.  He's a guy that, had you really a fan of back in his glory days, you could still feel pretty good liking; He hasn't sold out, kept making sub-par cash cow albums, toured casinos, or starred in reality tv shows. He's just a regular dude who wants a quiet life of walking his dogs and...that's about it.  I was a fan.

Being a rock/metal fan helps, but Judas Coyne is the big reason Heart-Shaped Box is so damn good.  Hill really delves into Coyne's psyche, and his past, and it's interesting to see how those things all led him to make certain decisions along his life path, but also led him to who he is today.  He's certainly no angel, but he's not the angel of death either. For a reader like me, who has always sorta idolized many larger-than-life rock stars, I had a great time rooting for the guy.

On top of having a great character to center the narrative around, a plot that easily captured my interest, Hill also paced his story quite well. I've found that pacing is particularly valuable in the horror genre, and Hill definitely seems to have a firm grasp on that concept here. You won't find a pace that is hell-bent for leather, instead Hill moves things along at a deliberate pace that will satisfy any reader's craving to get into the story. That deliberate pace doesn't let up when the intensity rises either, which made for some fantastic reading, and scary scenes.

If there was ever any doubt, I can now safely say Joe Hill, hallowed be thy name, is firmly entrenched near the top of my favorite author rankings.  Heart-Shaped Box hit pretty much all the right notes for me in terms of what makes a good book, and on top of that, in wizard-like fashion, Hill conjured up elements of rock 'n roll that were a delicious cherry on top.  If you are looking for a great read, that mixes some contemporary fantasy elements, with classic horror, and a dash of hard-rockin' metal music, Heart-Shaped Box is the real thing.

I've been wanting to read this for a while, I'm with you, the whole concept just sounds awesome. Then, it was super cheap for Kindle so I actually bought it. Now, there's only one step left I guess. :) Great review.

Nice! I'm glad you found a good deal on it too. I can't wait to read your eventual review.

Have you read Hill's other stuff?

Nope. I even had Horns for a bit but it got culled before a move. Just not enough room.

Dude, I HATE book culls. Had to do one before my most recent move. Got rid of over a hundred books and comics. Proud to say that my book collection has recovered nicely and I am nearly back to full capacity.

That being said... You'll live to rue the day you culled Horns!

My favorite Joe Hill thing so far is a tie between his short story collection, 20th Century Ghosts and his comics series Locke & Key. Highly recommended.

I definitely wouldn't have given it away now, especially now that Harry Potter's playing Ig. I will have to check those out too and your Locke and Key reviews again.