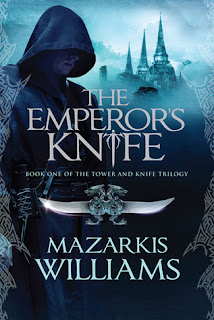 A terrible disease is chewing away at the heart of the Cerani Empire.  Victims of the disease find their flesh become increasingly covered in geometric patterns until one of two things occur: the victim either dies in agony, or becomes a carrier who is essentially a salve to the mysterious and evil Pattern Master.

The emperor himself, Beyon has been stricken with the disease, and though he hides it from his people for now, it is only a matter of time before the patterns spread and it becomes clear that he is not only afflicted, but disobeying his own decree that anyone showing signs of the disease be killed.

The emperor's loyal agents have been dispatched to the corners of the world in search of a cure.  A last ditch deal has been struck with the people of the northern plains in hopes that Mesema, the daughter of a great chieftan, and a windreader, can help not only produce a much needed heir, but also a cure for the disease. Meanwhile, the royal assassin, Eyul has been sent to the desert wastes to seek the wisdom of a hermit.

The plans all seem like random shots in the dark, but the empire is on the brink of disaster, and the Emperor seems to be out of good ideas.  While the emperor's health flags, and the empire teeters on collapse, his chief adviser, Tuivani, plots and schemes to turn the events to his favor.  However, there's other players in this game of illness and politics and even the emperor himself has an ace up his sleeve in the form of a secret brother.

The Emperor's Knife is a book I've had my eye on for a while, and when Night Shade Books did a free Thanksgiving giveaway, I jumped on the opportunity to get my hands on this book.  I was interested in the concept of an unstoppable deadly sickness, and Williams did a good job of creating a disease that, like all terrible diseases, is unbiased in who it attacks, and completely bewildering to those who try to stop it.  Adding to my interest in the novel is the fact Williams sets it in a middle eastern-like setting which I found to be a nice switch from the typical European setting that dominates many fantasy worlds.  These concepts certainly served to draw me into Williams' world and set the stage early for an interesting read filled with political intrigue and action.

Concepts are all well and good for getting a person to start a book, but it takes more than that to fashion a great novel, and Williams takes a couple more steps in that direction with a couple interesting characters and a great magic system.

I was most taken with Eyul, the Emperor's assassin.  He's a bit of an aged dude, and I liked that rather than center a huge chunk of the narrative on a young boy poised fulfill a prophecy, Williams instead based a lot of the story on a man who's getting a little long in the tooth, and finds himself doing the dirty work of the empire.   Sarmin, the emperor's brother, was another interesting character, as his life and mental stability made him a bit of a wild card, which helped spice things up a bit. Though Eyul and Sarmin were interesting characters, I never really got invested in the other characters, and found it hard to relate to, or make myself care about what was happening to a bunch of scheming privileged politicians.

Another feather in Williams' cap is the magic system in The Emperor's Knife.  Mages in this world have elemental powers which I not only found interesting, but genius in it's simplicity.  I'm not really a fan of complex magic systems, so it was refreshing to see one that was simple, creative and cool all at the same time.

Though I did find stuff to enjoy with The Emperor's Knife, I had my gripes too.  This is a novel with lots of political twists and turns, but the events, grand actions and schemes that play out over the course of the novel don't really seem to affect anyone other than a few dozen politicians and the guards who happen to get caught in the undertow.  At times, it almost seems like the Cerani empire is an empty place, populated only by the characters in the book.  This definitely made things feel a bit more flat, and took away from what was an interesting setting.

Additionally, though there was an unstoppable sickness at the heart of this novel, I never felt that Williams took advantage of the tension this plot element could cause. Though Williams tells the reader the sickness is plaguing many people in the empire, this is never shown, and thus weakens the story with this lack of depth.

When the dust clears, The Emperor's Knife is a debut that ultimately fell a bit flat for me.  Though I experienced some highs and lows, Williams brings some very interesting elements to the table and shows promise in his/her future novels. In the end, I wanted to like this book more than I did.  I never found myself fully invested in the characters or the world, as both lacked the vibrancy I need to get fully engaged in a novel.  Though this is the first in a trilogy, The Emperor's Knife can be read completely as a stand alone novel, as Williams wraps things up pretty neatly, yet leaves the door open just enough for stories with this world and these characters.

Reviews like these are not encouraging, but they keep coming up. I don't know if I'll give it a go ever, so thanks for taking the plunge for me.

I found it quite a hard read. Not because of the style or anything, but because it was just so flat. It was almost dull. I couldn't find anything interesting about it until those last few pages and I was like "Okay, too little too late?". I've never had to push myself so hard to get through a book.

I've got the sequel, so I'll probably continue one day, but it really is a puzzling book. There's good things about it, but it's almost exactly counter-balanced by the bad or not-so-good aspects.

@Bryce- Yeah, you could probably steer clear of this one. That's not to say that it's bad, because it's not. It just doesn't quite hit all the right notes.

That being said, I think Williams could deliver some good fantasy in the future.

@Kathryn- Agreed, a very counter-balanced book. I'll be interested to hear what you think of the sequel if you ever get around to it.

where to sell runescape accounts said...

I think this a little hard to read, not so interesting. But don't feel bad, we all make a little progress every day. Come on! You will be great.