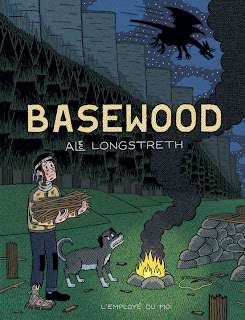 I picked up Alec Longsteth's Basewood late last year at the Short Run Comics Fest. I honestly don't know why I waited so long to dig in.

Unlike the cover pictured to the left, I snagged a boxed set of the five single issues that comprise the Basewood series.  It was pretty cool to digest this series in it's original format, but also cool to not have to wait out the long stretches between issues.  According to Longstreth, there were about twelve years between the initial idea and the completion of the story.  Talk about some dedication to your work! That dedication shows as Basewood stands out as one of my favorite fantasy stories in any medium.

Basewood begins with a bloody and battered man being slowly brought back to consciousness by drops of rain.  As he slowly comes to, he discovers that he's sporting a brutal headache, a bloody dome, and only one shoe.  Before he can get his bearings, or sort out his situation, he's chased through the woods by a dog. He soon realizes the dog is more friend than foe, and together they trek though the dark woods to a clearing where they discover two important geographical features in their vacinity: a giant flat-topped wall of sheer rock, and a large, thick-wooded forest at it's base. Hence, the name of the comic.

The man, who's experiencing some severe memory loss, constructs a tidy little shelter in the clearing, builds a warm little fire, settles down to get some rest, and soon finds himself attacked by a giant winged dragon-like beast.  Death at the claws of the mighty beast seems certain, but the man is rescued by a bow and arrow wielding old hermit by the name of Argus who drives the beast away.  Thus begins the story of Basewood, the story of Argus and the unnamed man's companionship, the mystery of his origins, and their efforts to survive in a forest plagued by a fell beast. 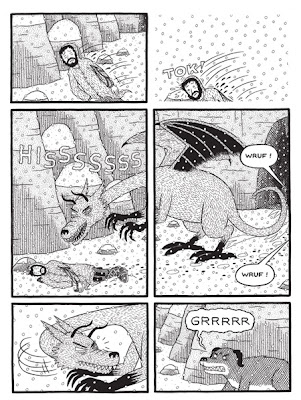 I was impressed by how easy it was to fall into the narrative flow of Basewood.  I instantly wanted to know more about the injured man, how he came to be in the middle of the woods, and what his whole story was all about. This mystery element pulled me in, but Longstreth didn't stop there, as he adds some danger with with the monster, and some more mystery with the Argus the old hermit of the woods.  By the time I was done with the first issue, I felt like I never wanted to leave Basewood and return to reality.

I was impressed with Longstreth's ability to work so well in the fantasy genre.  Rather than create an epic fantasy, he chose to take the more intimate, character driven approach and it really paid off. His characters are very well developed, and I loved learning about their lives, both past and present.

The fantasy world he sets the story in is pretty great too.  We don't get to see too much of it, but like all great fantasy settings, it's one that is filled with mystery, danger, love and interesting people. Best of all, it's one that, once you are done reading, you'll want to revisit again and again. 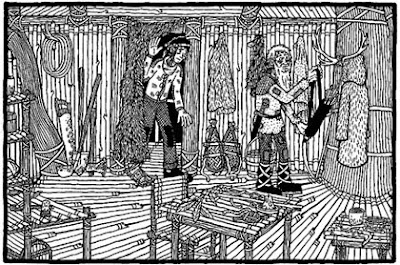 Basewood would still be pretty damn special if it only featured great writing with only so-so art, but Longstreth brought his A-game on the artistic front as well. I really enjoyed his cartooning style.His art is a really great match for the story.  There's a great blend of imaginative art that brings fantasy world to life, and art that captures the mundane, real world stuff and gives the fantasy setting its roots in reality.

Argus' tree house is a great example.  It has all the fantastical imagination of the most awesomest tree house ever, while having such a great degree of functionality that makes it feel like a real living space. Yes, there's an ingenious pulley system that gets the dog up in the big-ass handmade tree house, but once inside there's Argus's gardening tools.

Oh, and there's a snow issue.

For a good chunk of the third issue there's a giant blizzard, and there's just all these flakes and flakes of snow falling and swirling across the panels.  It's so beautiful to look at.  It also seems like it would have been an incredibly huge pain in the ass to pull off...but it looks great, so the effort completely pays off.  It creates a strong sense of disorientation, and confusion, which adds to the intensity of the issue.  This is made more awesome by the fact that some of the big mysteries of the story are revealed during the snowstorm which just makes it all the more awesome.

I think the best thing I can say about Longstreth's story and art is that it did such an amazing job of capturing my imagination, and whisking me away from my mundane life into this fantastic, and more simple, fantasy world that I sorta didn't want to leave. When any work, especially fantasy, can do that, can take you right off your couch or out of your seat and plop you down in a completely new and fascinating place, it is really special, and Basewood does just that with ease.  I think Basewood is a bit hard to track down right now as I believe Longstreth is trying to get it published, but it is worth tracking down. Highly recommended.

Hi Ryan. Thanks for the glowing review! I'm having a super horrible week and this review just made my day!

Hey Alec! Sorry about your shitty week, glad I can be a bit of a bright spot.

The thanks should go to you though for making such a great comic. Keep up the good work!