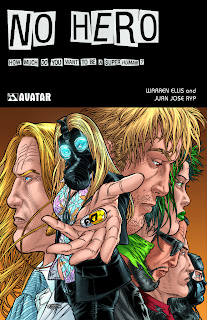 I realized something the other day, I'm getting older.  Things I would have liked even a few years ago, don't even seem worth the effort now.  Which is why I'm a little surprised with myself as to why I even chose to pick up No Hero from my shelf.

See, No Hero kinda exemplifies exactly the type of comic I don't go for any more: over the top action-over-story type comics.  They all seem to sing the same tune, and that song just doesn't do much for me anymore.

So why the fuck did I pick up No Hero from the shelf? I guess 'cause it's been sitting there for a while, and I paid good money for it. So, even though I feel like I've moved on from this brand of comics, I still felt like I needed read this before it collected any more dust from languishing on my shelves.  I wasn't even all that excited to check it out.

Not exactly a recipe for success.

As I sorta expected going in, No Hero delivers sophomoric writing that appears to be completely devoid of any effort on the behalf of Warren Ellis.  The plot is simple: An eccentric genius creates a wonder drug, FX7, that can give the user extraordinary powers.  Carrick Masterson, the guy who created the drug, has been selectively doling it out to a few individuals over the years, this creating generations of superhumans with the communal goal of making the world a better place by policing the globe and fixing shit as they see fit, when things go wrong.

Over the past forty years, there's been a few generations of these powered up people, known as The Levelers, who later became known as The Front Line. However, in that time, they've also managed to piss off a bunch of people as well, and now members of The Front Line are being killed left and right.  Which leads Masterson on a mission to rebuild the team, and the first guy he picks out as a candidate is a young man with strong ideals and an overwhelming desire for justice. But he has some strange reactions to FX7 drug, and now that he's all jacked up with superpowers the shit really starts to hit the fan. 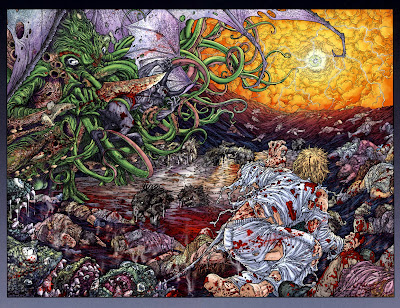 The plot in No Hero is nothing special; when things get slow, there's some tits and ass chucked in, then later on, there's a twist that sorta makes things more interesting, but really isn't very exciting.  Like I said earlier, Ellis' writing is nowhere near on par with his efforts on Planetary or Transmetropolitan.  It's hard to tell the same guy wrote this stuff.  The only thing that makes No Hero come even remotely close to being special is the art of Juan Jose Ryp.

The dude can draw some crazy, hyper detailed scenes, and he's pretty much given full reign here as there's a lot more substance to the art than there is to the story.  Easily my favorite part of this comic was the four consecutive double page spread sequence where Masterson's would be hero trips balls from the FX7 drug.  Talk about a bad trip... 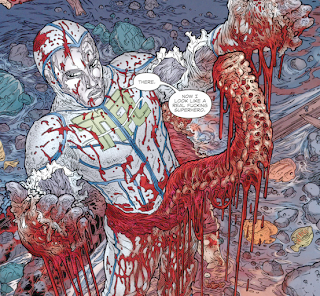 Sadly, too much of this comic felt like it was aimed at a demographic half my age, which didn't do much for me.  Things get extremely bloody, violent and silly pretty damn fast in No Hero. There's just too many moments where I rolled my eyes, and forged ahead.  I guess some folks would really enjoy seeing spines get ripped out, and faces punched off. Shit, I would have liked that shit only a few short years ago, but it was just too much here.  That kind of extreme violence really loses it's power and impact when it is happening page after page after page.

If seeing a dude use someone else's spine as a strap-on is cool to you, then by all means, give No Hero a whirl, otherwise steer well clear of this mess. There's some cool Juan Jose Ryp art, but he's done better comics with equal skill. For me, this one is going in the sell-back pile.

Warren Ellis was one of my favourite writers back in the day, and I dare say he's still capable - his new book, Gun Machine, is great - but since I started reading comics again, most of the stuff of his I've caught up on has left me feeling the exact same way. Which is to say, like I've gotten old, god damn it.

When did that happen, exactly? :/

Yeah, I think I just woke up one day, with a pain in my back and an ill demeanor towards juvenile comics.

Both the back pain and the ill demeanor seem like they are here to stay.

Glad to hear Gun Machine is good. Will there be a review at TSS?

It was Garth Ennis' Crossed that killed these sorts of comics for me, and it's my hips that are giving in. Otherwise... snap.

As to a write-up of Gun Machine on TSS, I have been meaning to get around to writing one, but the longer I leave a thing like this, the less likely it gets. Capsule review: it's all the reminder the likes of you or I need, even in our in our embitteredness, that Warren Ellis still has it.

That's a damn fine capsule review! I might just have to check it out. I've never read any of his prose work.