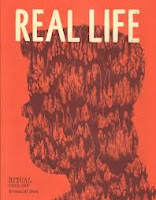 Ritual #1: Thanks to this absolutely wonderful short comic, which originally ran as a back up for Prohpet, I became an instant fan of Malachi Ward and Matt Sheean.  Since reading Shock Post I've been on the prowl for more comics by those dudes, and I came across Ritual at the Short Run Comics Fest a few months back. I read it way back then, but recently gave it a reread since it is a bit of a mind-bender.

There's a couple of strange occurrences at the start of this comic, that definitely set the stage for some weirdness later on. The very first page sorta sets the tone and gives the sense that this comic is gonna be a bit out of the ordinary. There's a dark town, a disembodied hand hovering over the town, a sudden burst of bright light as the hand closes, and then things return back to normal as the light winks out.  From there, things get even weirder.

The next page shows a couple in bed, and the woman, who is awake, watches as beetles crawl under her man's skin.  Pretty weird right?  Well, from there things go from weird to normal... Maybe too normal.  After that, as morning arrives, the woman gets out of bed and goes about another day in the life.  It isn't until later in the day when she's at home playing her ukulele while her partner does some work that the power goes out, and the story takes another turn. 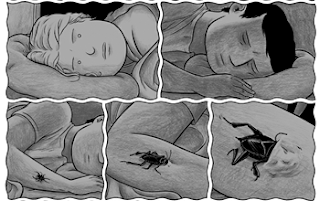 Ward's art reminds me a bit of Charles Burns, but there's also some other influences in there I can't quite put my finger on. Either way, his art is real nice to look at, and he's got a great knack for setting a creepy, dark tone. My fandom grew by the page.

I gotta say, I really enjoyed this first issue of Ritual.  It was a bit on the weird side of things, but I like that. I've read it twice now and still don't totally know what is going on which makes me look forward to reading it again someday. There's parts where the reader needs to make interpretations, and parts where you just gotta take events as they are, and sometimes that line is blurry.  All around a good read, and I'm looking forward to checking out more of Ward's work. 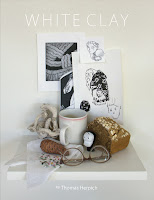 White Clay: I remember the day this arrived in my preferred comic shop; it stood out on the shelf of new and notable arrivals and seemed so different from what was in my comic pile that day that I decided I should pick it up if only for the sake of variety.

Apparently, Thomas Herpich, the artist behind this one-man anthology comic, is one of the dudes who works on Adventure Time.  I'm completely out of touch with popular modern cartoons, but I keep hearing about all these great comic guys who are connected to that show, that I gotta say, I'm intrigued by it.

Anyway, asides aside for a moment, White Clay is another comic featured in this little round-up that has moments of straight up weirdness mixed in clarity.  There's about nine comic-pieces in this thirty-two page issue, and they are by varying degrees witty, insightful, strange, fun, cute and imaginative.  Herpich definitely shows his versatility here, and I was roundly impressed from one story to the next.


This is another one that I've read a couple times before posting, and again, these comics, while good the first time around, were even better with another read.  I really like Herpich's art, especially his ability draw strange human-like creatures.  He's a deft hand with the india ink too, and I really appreciate how the varying shades of grey add depth and texture to his work.  Herpich is definitely a guy I want to keep an eye on and hopefully I'll be able to track down more of his work. Good stuff!

Lose #3:  I know I've already reviewed Lose #4 and this may seem like I'm working backwards in time, but I never thought I'd actually get my hands on any of the previous issues of Lose.  Then I went to Lucky's in Vancouver, and found Michael DeForge's third issue of his one-man comics anthology.

If you recall from my review of Lose #4, I was not totally convinced of the all the love and accolades that get heaped upon this guy. I just wasn't seeing it from reading only that one item in his bag o' tricks.  Well, I'm glad I didn't write DeForge off, because I really enjoyed Lose #3.

Again, things are a little weird, as DeForge seems to enjoy dialing up the oddities in his comics. Last time around I said that his comics "dipped into levels of weirdness that was difficult to digest as a reader" and while those dips are certainly there in this comic too, but this time around the "dips" were like a tasty sauce; easy to enjoy and hard to stop once you got started.

Overall, I found the comics much more coherent this time, and enjoyed Lose #3 from start to finish.  There's a lot to like about Lose #3 and it all starts with an awesome page of tongue fads.  Personally, I prefer to keep my tongue "classic", but I can see the appeal of the "caged heat" and "the rose" fads.

Though every comic in this anthology was pretty damn great, I loved Dog 2070 which followed a divorced dog dad though his somewhat strange, somewhat sad, all together too real existence.  This comic manages to be insightful, smart, funny and a bit depressing all at the same time. A pretty impressive feat!

With another DeForge read under my belt, and a good one at that, I'm definitely looking forward to reading more of what he has to offer.  It looks like DeForge will have at least two new comics coming from Koyama Press in 2013, so I'll have my eye on those once they're published.


So how about that? Another foray into the wilds of indie comics, and I again, I not only return unscathed, but with three great trophies!  Talk about some talented folk who don't get enough recognition for their talents... I've really enjoyed this side of the medium, and you'd better believe I'll be reading more titles like these in the future.
Posted by Ryan at 2/08/2013 07:22:00 AM

Content:
Welcome to Make Money Online with best investment in Hedge fund day trading with high returns on Daily Interest the world best revenue sharing program in which High Yield Investment Program, Best Hyip, Best Investment, Hyip Monitor, Forex Fund, Daily Profit, Monthly Interest, Monthly Profit, Earn Money Online, Money Maker Group, Dream Team Money and like this much more and you can withdraw the amount throw referral commission, eCurrency Invest, LibertyReserve, Alert Pay and SolidTrustPay as well. Get 200% profit within 150 days and the minimum withdraw is only $5 which is on daily basis.
For More Details click the link below: