Yesterday, Seattle played host to another great comic event,  Short Run. A brand-new comics event, Short Run is a showcase of comics, zines, art books, animation and more...yes, I just copied that from the poster.  Basically it is a bunch of indie and underground comic creators coming together to put on a free event to showcase their artistic talents.

There were a number of comic creators on hand that I was interested in meeting and seeing their work, plus the event was FREE so it was pretty much no-brainer for me.  There was also a lunch counter nearby that serves delicious fried chicken sammys so I was doubly excited to make the trip!

Short Run was definitely the most humble of any comic related event I've been to this year, but it was certainly well attended.   Plenty of folks were on hand, to the point where the aisles felt pretty crammed and were hard to maneuver around.

When I arrived on the scene, I made a bee-line to Theo Ellsworth's table, as he was the one guy I was most looking forward to seeing.  Ellsworth is one of those comics creators whose art is hyper-detailed, incredibly imaginative and monster-tastic.   Check out the guy's blog for a glimpse at his stuff...I might have a new favorite artist.  I picked up his latest work, The Understanding Monster book one.  I'm looking forward to giving that one a read.  I also picked up a boxed set of Alec Longstreth's mini-comics, which contains all five issues of Basewood, his fantasy tales. Here's a pic of my modest haul for the day: 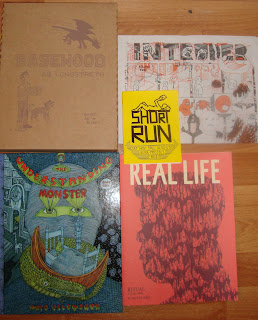 Overall, I'd say that the event was pretty successful, especially given the fact that this was Shot Run's first year.  There was a pretty big range of folks there, from people who are literally printing and stapling their stuff together on their own, to folks how have "made it" and been published by either smaller independent publishers like Secret Acres, or big dogs like Fantagraphics.  Either way, it was cool to see the entire spectrum of the independent comics industry on hand.

Judging from the amount of fans on hand, and the amount of comic-makers in the house, I'd say it's a pretty safe bet that Short Run will be back again next year.  I enjoyed the show, and would love to see it grow into a yearly tradition.
Posted by Ryan at 11/04/2012 05:22:00 PM