The Devil's Alphabet by Daryl Gregory 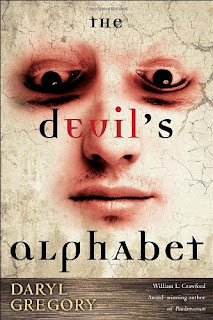 In The Devil's Alphabet, Paxton Martin returns to his hometown of Switchcreek, Tennessee after living in Chicago for many years. His reason for the homecoming is to attend the funeral of his old friend, Jo Lynn, who has supposedly committed suicide. Switchcreek however, is no normal town, and it should come as no surprise that there may be more to Jo Lynn's death than expected.

When Paxton was fourteen, a mysterious disease rocked the small town of Switchcreek. When the dust cleared, and the quarantine was lifted, one third of the residents, including Paxton's mother were dead, and another third, Paxton's dad included, were mutated into monster-like oddities. The disease got called Transcription Divergence Syndrome, or TDS for short, and it had three waves of transformation which led to three varieties: the first wave got called "Argos", massive gray-skinned giants, who are apparently infertile, but extremely strong. The second wave resulted in a group called "Betas", sometimes called blanks, due to their lack of human expression. The betas are hairless, seal-like folk whose females members are able to reproduce asexually. The final wave are the incredibly obese "Charlies" or Chubs as they are sometimes called. The older male chubs secrete a mind and mood altering drug-like fluid called Vintage, which may be the town's chief export.

Paxton was one of the lucky few who escaped the disease seemingly unchanged. In addition to the loss of his mother, and the transformation of his father, Paxton's best friends, Deke and Jo Lynn were also transformed by the disease. All of which were factors in causing Paxton to flee to Chicago. Jo Lynn's death brings him back and a decline in his father's health keeps him in town for longer than expected. While there he reconnects with old acquaintances, uncovers some seedy, small town corruption, acquires an addiction to vintage, and unwillingly encounters some of his repressed memories.

The thing that hooked me into this book were the mutations caused by TDS. Gregory did a fantastic job of not only creating human, yet very un-human life forms, but he also did a fantastic job of creating individual cultures within the various groups that inhabit the town of Switchcreek. I enjoyed the interplay between not only the TDS groups themselves, but also between those groups and normal humans. I can't imagine the author's challenge of creating these groups, and then inserting them into regular every day American life, but Gregory did just that, and he did it quite well.

The main character Paxton is not the most easy to relate to guy. For most of the book he plays a very passive role as things happen to him and all around him, but he rarely actively sets out to make things happen. On top of the fact that Paxton's not a go-getter, he's also just not that awesome of a guy, what with him being a borderline alcoholic, and an avid drug user and all. Needless to say, I found it hard to root for the guy.

Compared to Paxton, the secondary and supporting characters were interesting, often likable, and well written. Paxton's Argo friend Deke, was quite interesting, especially in the way he fit into the town's intricacies. Switchcreek Mayor, Aunt Rhonda was another strong character. Her motivations are clear, though her machinations are murky at best.

Much like his previous work, Pandemonium, The Devil's Alphabet is another strong effort from Daryl Gregory. This book benefits from strong plotting and solid pacing. The story moves along at a modest clip, and kept me interested throughout. Overall, this is another good book from Gregory, though for my personal tastes, I didn't like this as much as Pandemonium. Still, Gregory seems to be a strong, and creative new voice in the fantasy/horror genre. I certainly wont hesitate to read whatever his next project may be.

This book is on my list to get. But it sounds like an interesting twist on the town. Thanks for the review, as you reminded me I need to get this book. Thanks!

Melissa- I'm definitely a fan of Gregory. I really enjoyed his debut, Pandemonium. I hope you enjoy the book once you get your hands on it.