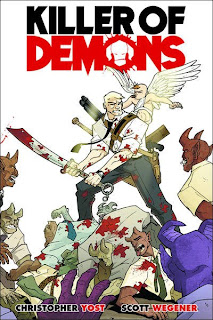 Killer of Demons is the story of Dave Sloan, he's a junior account executive, and a regular-ass guy, except with one pretty big difference...he can see the demons that have infiltrated our world. Shit, he even has a little cherub angel guy that helps him spot, and kill the demons. Which he does, with bloody and deadly results. Usually with a sword, axe, or gun. There's just one problem, all the demons that Dave sees also tend to be people that annoy him; co-workers, dudes with leaf-blowers, and fast food restaurant employees, to name a few. So is he really doing the work of God, or is he just totally insane?

The premise of Killer of Demons is pretty great, and it is handled in a very light-hearted manner. It's nice to read a something every now and then that doesn't take itself too seriously. This is essentially a bloody, demon-death filled romp that manages to be pretty damn funny as well.

The writer, Christopher Yost spins the tale out at a nice, speedy clip, and doesn't waste too much time between demon slayings. The plot is fun, and the characters are all good for a laugh or two. Especially Dave's MMORPG/FBI Sex-crimes investigator brother who just happens to have a vast collection of sharp, pointy, bladed weapons and an arsenal of pistols, shotguns, and automatic weapons in his basement. The main character, Dave is great too, and his constant questioning of his own sanity can be quite entertaining.

The art of Killer of Demons is where I found things a bit lacking. The artist, Scott Wegener does a pretty good job with the action and fight scenes, but some panels just fall a bit flat, and aren't that interesting to look at. The art gets the job done, which is fine, but it doesn't stand out, or catch the eye. There weren't any panels that really impressed me, or made me stop and stare for a bit. Those moments where I just stare at a page, taking in all the details of the artist's skill is one of my favorite things about the comics medium, and that just didn't happen here.

Killer of Demons is more or less perfect if you are looking for a short, yet fun, light-hearted read. The trade only collects three issues, so it is a light read in more ways than one. Still, despite the low page count, and the less-than-stellar art, Killer of Demons is guaranteed to bring a smile to your face as it has some pretty great moments of hilarity. This one is definitely worth a look if you are in the mood for some mayhem.