Album of the Year

Welp, enough thinking about my year-end "Best Of" lists. The time has come to actually start writing about my favorite stuff for the year...So, without further ado, I give you ALBUM OF THE YEAR! 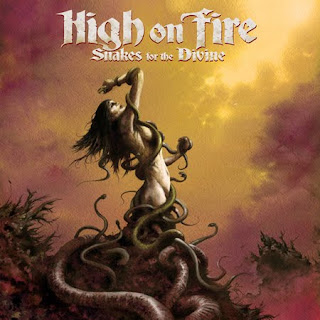 Snakes for the Divine by High on Fire.

I'm starting out with Album of the Year, because its a no-brainer. I only bought a dozen or so new albums this past year, and I had the feeling there was something special about this one when I reviewed it back in March. Simply said, this album rocks. From the opening song, to the final seconds, this album is a pleasure to my ears. Overall, Death is this Communion is still my favorite High on Fire album, but from a musical skill stand point, Snakes is a better album. It is always nice to see a band evolve, and get better. That's definitely the case here. There is a larger variety in their sounds, and each song stands out individually. Also, Matt Pike's singing/growling got a bit better as well. I can see how his singing style might be a turn-off for some listeners, but there is a slight up-tick in the listenable-ness of his growl.

High on Fire is typically a thrashy, aggressive band, and I think the times when they mix in other elements like long, repetitive riffs, and more melodic songs like Bastard Samurai is when they stand out from other bands of their ilk. Even though this album has some progressive and stoner moments, it still manages to be a powerful, heavy, and loud metal album.

Unfortunately, I never got to see High on Fire play live on tour for this album, as that always adds to my enjoyment of an album, but hopefully they'll come through Seattle again soon. If you are into metal music, and you don't own this one yet, get your hands on it. Turn your speakers up to eleven and enjoy.

Email ThisBlogThis!Share to TwitterShare to FacebookShare to Pinterest
Labels: High on Fire, music

Good call. It's definitely one of my favorite albums of the past few years. Other highlights from 2010 for me were Agalloch's "Marrow of the Spirit", Alcest's "Ecailles de Lune" and Kylesa's "Spiral Shadow".

My new music listening was pretty underwhelming this past year, but the stuff I did hear wasn't as awesome as High On Fire. I got some music money for Christmas though so I plan on scoring some new music in the coming weeks.