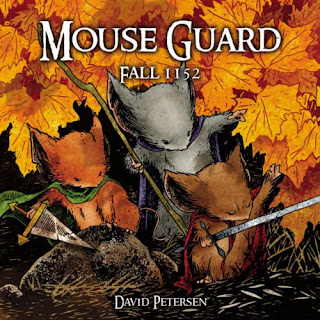 The forest is a dangerous place for a little mouse. In the past the mice-folk have been lorded over by evil weasels, and have lost territory in recent wars. Helping protect mouse-kind are the Mouse Guard, skilled warriors, defenders of mice, and peace keepers of the forest.

In Mouse Guard Fall 1152 three of the Guard's most skilled set out from Lockhaven to find a missing mouse who has gone astray on the treacherous paths between mouse-towns. Once discovered, the body of the missing mouse offers up some clues to a much larger conspiracy. In the far reaches of the mouse lands, and even in the hearts of their cities and towns, a rebellion is brewing and the Guard Mice find themselves in a dangerous race against time to save mouse-kind.

The most noticeable aspect of Mouse Guard is the pretty artwork done by writer/artist David Peterson. Every panel is eye catching and fun to look at. Also, his artwork serves to tell a lot of the story. There isn't a ton of dialog or narration, so the plot leans heavily on the art to help it chug along.

The plot itself is a generic rebellion plot without any twists or turns to make it fresh or interesting. Peterson uses a very straight forward style of delivering the story, and there isn't much depth below the surface. The plot also lacked tension, and the end result seemed to be a foregone conclusion. While the artwork was nice to look at, the action scenes lacked in dynamics that would have given them an edge. It was clear early on that this one is aimed at a young crowd, but that doesn't excuse it for having a lackluster plot.

This book might appeal to fans of the Redwall books, or other anthropomorphic tales, but it doesn't really measure up. If you are really desperate for some sword-wielding mice this might just barely whet your appetite, but it'll leave you wanting more in terms of story.