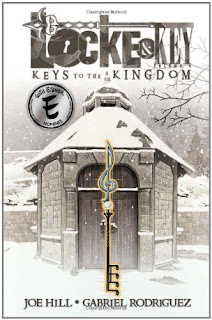 Just when I thought Joe Hill's Locke & Key series couldn't get any better, it did.

In the fourth volume, Keys to the Kingdom, everything gets ratcheted up to a whole new level of greatness.  There is so much going on in this volume that it almost seems like there's two trades worth of comics here even though it contains the usual six issues worth of material.

For one thing, Keys to the Kingdom reveals a bunch of new magical keys.  By a bunch, I mean that the total known keys probably doubled here.  There's some really cool ones too, my favorites, and the one used in the coolest ways being the music box key, and the skin key.

In many ways, this fourth volume feels like business as usual in the world of Locke and Key, as it covers much of the same ground as past volumes, just in slightly different ways.  The Locke kids deal with stresses around the home, stresses at school, stresses with their personal lives, and stresses regarding the strange house they live in.  The nice thing about this volume is that the Locke kids finally get savvy to a few things that, as the reader I have been privy to, while they have remained largely clueless.

This literary technique, where the reader knows way more than the protagonists, has built up a lot of drama and tension in the series, and it is a lot of fun to know more than the protagonists, yet simultaneously tormenting as I have had to watch them bumble around trying to figure shit out.  Hill has done a great job of teasing out this drama to the point that I nearly reached the breaking point and started yelling at those damn kids to smarten up.  Yes, that would have been somewhat satisfying, though pointless, and it would have made me feel like a grumpy old man too.  But goddammit, if only those Locke kids could only get their shit together!  It doesn't help that they have an adversary that is always at least one, if not a couple dozen steps ahead of them. The two people who are the most on top of things are the last two characters you'd expect, Bode, the Locke kid in Kindergarten, and Rufus, Bode's playmate who has an undefined developmental delay.  Too bad they need Kinsey and Tyler, the two teenaged Locke kids to help out, yet Kinsey and Tyler seem to be constantly distracted by their typically stressful and mixed up teenage lives.

All the while Zack Wells, Kinsey's BF and Tyler's epic bro, is the sole source of all their problems.  Zack is one of my favorite, slash, most loathed villains of all time.  He is one incredibly cruel bastard, a talent he has displayed to epic proportions in previous volumes. Yet, in this fourth volume he goes far beyond cruel, deep, deep into the realm of pure evil.  It is hard to watch.

Hill certainly has things set up for the final two volumes, as Keys to the Kingdom certainly put a lot of awesome pieces into place.  There was a brutal plot twist right at the end here, and it's one of those twists that as a reader you are happy to see because it makes the story so much more interesting, and makes you instantly crave the next installment...But on the other hand, makes you feel sick because the plot twist just totally fucks over the person or persons you care for in the story.

What this all boils down to is that Hill is a master of messing with his reader's emotions, and he's not afraid to raise the stakes of his story.  I've been very impressed with the man's prose work so far, but I think I'm most impressed with his work on Locke & Key.  This is not only one of the best comic series I've ever read, but it is flat out an amazing piece of writing.  This is an amazing blend of horror and fantasy, and both elements are done with expert level skills.

It's very easy for me to go on about Hill's writing, but this story wouldn't be what it is without Gabriel Rodriguez's artwork.  Rogriguez is more than just a passable artist.  He's an artist who can not only show the story, but he does it in a very interesting way. Rodriguez shakes things up by using interesting page structures, unique panel layouts, and a variety of "camera angles" to show the story as it unfolds.  This is all well and good, but I felt like he really cut loose on this volume as he displayed a couple different art styles as well...my favorite being his Bill Watterson tribute art at the beginning of the volume.  Overall, Locke & Key is one of the few comics out there where the quality of both the writing and the art are far above the usual standard.

With four out of what will eventually be six volumes under my belt, I think I can firmly say that Locke & Key is one of the best comics available right now.  For fantasy readers who don't usually read comics, this is the ultimate gateway for you.  It is penned by a modern master, and features art that is easily digested, and incredibly good.  On top of all that, it features story elements that though familiar, are creative, unique, and terrifying.  Locke & Key is great stuff, and Keys to the Kingdom solidifies the fact that this is an awesome comic.