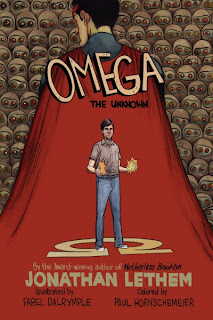 I was drawn to Omega the Unknown for the fact that Farel Dalrymple, who has impressed me with his artwork before, handles all the artistic duties for this ten issue story.  The fact is, I've been actively seeking out his work for the past few months, because I think he's a great artist.  Sadly, his published works are hard to come by, and he's one of those artists who works sporadically.

Even though this is a Marvel comic, one look at the cover, or a quick flip through the pages, and it's quite easy see that this ain't your ordinary Marvel story.  The titular hero is pretty much an unknown (just like the title says)...unless you're a follower of obscure 70's heroes who never hit the big time. Well, apparently Jonathan Lethem is, 'cause he wanted to revive one of his favorite heroes from his teen years, and boom, next thing you know, he's writing a ten issue arc.

So what is Omega the Unknown all about?  Well, that's kinda tough to answer.  There's a mute hero, all dressed in blue, who battles robots with the prime directive of killing the guy in blue.  There's also a teenage boy, the recipient of a strange up-bringing, whose life seems mysteriously connected to this blue guy.  There's also a cheesy (and annoying) costumed hero by the name of the Mink, who gets involved in the drama.  Mix in some flesh eating nano-robots, a talking, and singing park statue, and a human-sized hand that was once part of the Mink, and you've got the recipe for what is quite possibly the strangest comic on the shelves.

If I could only use one word to describe this comic, I'd say it is "surreal". 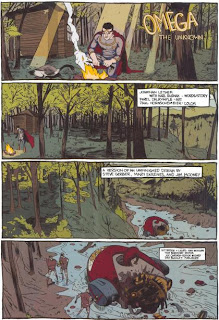 The story is incredibly strange, and though there are elements that play into the comic that are typically elements I enjoy, I didn't find myself nearly as entertained as I had hoped.  The reason being is that there was no way to connect those cool elements, (namely the flesh eating nano-robots) to any kind of story or character that I cared about.  There was absolutely no way for me to relate to any of the primary characters here, and the one character that was normal, a teenage girl named Amandla, didn't have enough of a role in the story for me to latch on to.  By the end I didn't even feel all that compelled to finish the graphic novel.  Which isn't a very good sign.

I'm also a little torn on the art as well.  There's not doubt that Dalrymple is a unique artist, who can instill a certain feel on a comic with his style, but I didn't find myself nearly as impressed with his interior art as I had expected.  It was just too inconsistent for me.  There were times when I thought the panels looked really good, and times when I thought they looked rather pedestrian, and that his layouts needed work. 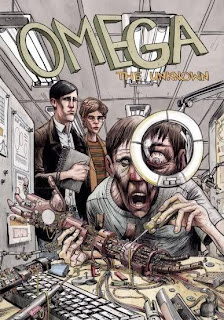 The biggest detractor, aside from the strange, surreal story, was the color palette that was employed.  There's absolutely no color gradients in any of the panels, so if something that is purple, it is the shame shade of purple no matter how the light is hitting it.  This makes everything feel kinda flat, and after a while, got a bit annoying. I know it seems nit-picky to drag the coloring through the muck, but the fact is that it didn't do justice to Dalrymple's art.  Especially when you compare the interior art to that of the covers which Dalrymple colored himself, and which look waaaaay better.

Omega the Unknown is easily one of the weirdest things I've ever read.  And when I say weird, it's not weird in a good way, like China Mieville's stuff, it's just flat out weird.  The kind of weird that leaves you feeling a bit unsettled, and mentally befuddled.  Weird..

Overall, this isn't something I can really recommend.  Sure, Dalrymple's art is cool, and way different from the kind of stuff that is normally attached to anything baring the Marvel logo.  For my money however, this isn't his best work, or work that allows him to flourish.  I'd love to see him get more steady work in comics as I think he's a great artist, but I feel like this is not the best example of the kind of quality I associate with Dalrymple.  I don't say this often, but this one was didn't do it for me, and likely wont thrill too many others either.