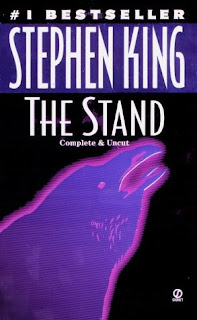 Even though I’m still learning how to do basic things, like turn on the oven here at my new hobbit hole I figured it was time to take a break from taking things out of boxes and put something down on paper.  Or on screen, or whatever it is we blogger folks do.

Anyway, I read an incredibly epic book recently.  A book so epic in fact, that I’m still struggling to form a coherent opinion about the whole thing.  Truth be told, I finished the book, (the book is “The Stand” by the way if you couldn’t tell from the title of this post), about a month ago, but I’ve been steadily pushing it back in the review queue in favor of things that are easier to tackle.  Page-wise I’m pretty sure this is the longest book I’ve ever read, and time-wise, it took me longer to read than it usually takes me to read a Steven Erikson Malazan book, so in other words, the better part of a month.  Needless to say, between the reading of The Stand, and now, I’ve had lots of time to mull it over and think about the book and what it means.

First off, my expectations were pretty high going in because from everything I’ve ever heard about The Stand, it’s said to be Stephen King’s greatest book.  So… a book by Stephen King, one of my favorite authors, and it’s supposed to be his very best. Yup, recipe for high expectations.  Yes, this one was good, but King’s best?  I’m not totally convinced.  Aside from this and his Dark Tower series, I’ve only read a half dozen or so of his other works so the jury is still out on that one.  Regardless, it was a book I struggled with at times.

For those who haven’t yet read the book, The Stand takes place in the early 90’s when a brutal flu epidemic sweeps its way across the planet decimating ninety-nine percent of the population.  For the book’s sake, the focus is here in the States, and follows a variety of the survivors as they struggle to recreate some semblance of life in the aftermath of the great flu.  Before too long, two factions are formed, one rallying behind an old woman and congregating in Boulder, Colorado, and the other rallying behind Randall Flagg, none other than the Man in Black from King’s Dark Tower books, in Sin City, Las Vegas, Nevada.  The two groups seem to be at opposite ends of the good versus evil spectrum and some sort of final reckoning seems destined.
That’s a pretty basic breakdown of the plot and it does little to cover the variety of characters and relationships at play in The Stand.  King follows a number of the survivors by way of putting the reader right in their heads for an up close and personal look at their view of these life-altering and life decimating events.  There’s some very memorable characters in this book and King does a great job of making these folks come to life and feel like individuals despite the large cast of characters.  It was interesting how everyone’s past shaped how they acted and interacted after the flu outbreak, yet their pasts meant little to the other people they met.

The basic concept behind the book (post apocalypse) is one that gets done over and over these days, and though it isn’t fair to judge a book published decades ago on the trends of today, I had a hard time not feeling like I was retracing my own steps in the sand.  I know that’s unfair, and I tried to quell those feelings, but there’s no doubt they played a role in my enjoyment of this book.  This struggle resulted in phases where my interest level in the book waxed and waned.  For book of this size, which is usually enough to make me steer clear, a lack of interest is nearly damning.  This is one are where the hype helped out, as I was compelled to keep reading, if only to just see what all the fuss is about.
Additionally, the characters were often more than enough to keep me forging on, and I was rewarded with some pretty great character arcs that led in some really amazing directions.  I found myself becoming pretty attached to a few folks, and looked forward to sections of the book where they played a role in the story.  The more stuff I read by King, the more I come to appreciate how great he is at character development.

There was one quality about this novel that really bugged me the whole time I was reading though, and it’s that pesky aspect of representation.  I felt that the book would have been much stronger had there been a more diverse representation of the plague survivors.  I know that not every plague survivor was a white person, but there were a lot of times when it sure felt that way. Yes, there was definitely one key character who was a person of color, and one very central female character, and other character who was mentally differently abled, but aside from that, there were a lot of white dudes. Maybe this is a case where I’m wrongfully instantly assuming a character's whiteness because that’s my own perspective, but I never got the impression that the lion’s share of the characters were not white, heterosexual males.  Maybe that won’t take away from the story for others, but it did to some degree for me.

I think the biggest take away I got from this reading experience is that there’s some important tie-in stuff related to King’s Dark Tower series.  Stuff that helped explain things I didn’t totally grasp when I read through those books over the past two years.  There’s some really obvious connections and some that I’m sure I missed too.  Still, it was cool that the books felt intertwined as part of large tapestry.

Overall, I can't say I was a huge fan of The Stand.  I think it has some great strengths, but as I mentioned above, there’s some weaknesses as well.  Most of all, I guess I just don't see what all the fuss is about over this book.  I wasn't really all that impressed.  I've definitely read stuff by King that is much sharper and more concise.  In the end, a good, strong book that for me missed the mark.