There's two comic related things I've been wanting to do for a while now; read some The Spirit comics, and read something by Darwyn Cooke.  Then, one day, while browsing the used comics shelf at a bookshop, I discovered a couple of The Spirit trades written and drawn by Darwyn Cooke.  Win, win!  So I bought them and took them home, where they sat on my shelf awaiting a time when I needed something light and fun to read.  That time came around mid-terms.

Despite not knowing a damn thing about the character, I dove right in and figured I'd get the hang of things sooner or later.  Lucky for me, The Spirit isn't really the kind of guy that needs a whole big introduction and origin story to be enjoyed.  Sure, Cooke peppers that stuff in, but he focuses primarily on making sure the story itself is a lot of of fun, easy to get into and easy to get out of.  I guess you could say this was sorta a popcorn/fluff read, but it's a very well done fluff read.

The story starts out with a pretty standard abduction story.  Ginger Coffee, (Yup, pretty much everyone has a goofy-ass name like that in this comic), a well known news reporter, is abducted by some mysterious baddies,and taken to an undisclosed location.  The police are baffled, so it's up to The Spirit to crack some skulls and crack the case.  This opening story serves mostly as a way to introduce the reader to the world of The Spirit and from there Cooke introduces a bigger story arc that will span the length of his run with the character. 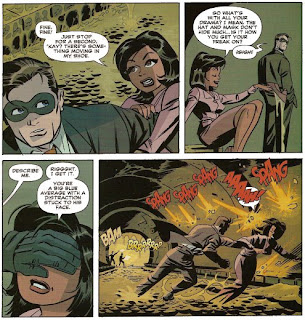 One aspect that I really appreciated about The Spirit  is that Cooke told the main story arc in a non-sequential fashion. He broke things up by inserting issues here and there that at first didn't seem to fit the main story line at all, but eventually came to play a role in the overall story by filling in back story, setting up things for later down the line, or developing characters that are integral to the plot.  Now, a lot of comics do this, but rarely have I seen this done so well.  My experience with this narrative trick is that it usually comes across as very overt and heavy handed.  Not so here.  Cooke skillfully made me think one thing about what was going on, only to reveal later down that line that certain instances were much more than they appeared.  It's nice to read something that is scripted so well.  Cooke made great use of the medium to deliver a great plot.

An aspect even more impressive than the plotting was Cooke's art.  I've always admired Cooke's art style, which is evocative of the golden age of comics.  I think he is a perfect match for The Spirit, and its cast of characters because they also evoke that golden age feel.  At first glance, his art seems a little more cartoony than I usually prefer, but once embedded in the story I really felt like his art made the story and the characters come to life.

I gotta admit, this whole thing, characters, story, and art all seemed a little too campy to really be something I would enjoy, but I was pleasantly surprised.  The Spirit delivers a solid story with plenty of action and hi-jinks.  It's also a story with heart, and even a good sense of humor.  Put simply, there's a lot to enjoy, and very little to frown upon.  As long as one isn't searching for a read that will be emotionally engaging and provide deep meaning, The Spirit will likely entertain. It's light, it's fluffy, and it's a lot of fun.