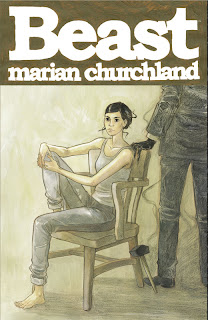 Beast was one of my must have pick-ups from this year's Emerald City Comicon. I'd been wanting to check out some of Marian  Churchland's work for a while, and ECCC seemed like the perfect opportunity to get my hands on some of her work since she was slated to be in attendance.  However, Churchland was a last minute cancellation, but her husband, and awesome comic creator, Brandon Graham, was kind enough to bring some copies of his wife's work with him to ECCC.

In Beast, a struggling young sculptor by the name of Colette gets hired to create a portrait of her client from a massive block of marble. The marble has been brought all the way from Carrera, Italy and all the other necessary materials are provided for Colette as well.  In addition, room and board at the client's home are provided free of charge.  It seems like the perfect job for Colette, until she sees the house, a decaying old thing in a neighborhood whose glory days are far behind.  On top of that, her client is a mysterious and shadowy figure known only as Beast.

Beast has a bit of that modern fairy tale feel to it as the characters and the story feel somewhat familiar, but at the same time, it all seems very new and fresh to the reader.  I was immediately taken in by this tale which delivers a great sense of mystery and also some powerfully emotional moments as well.  I was very impressed at how easily I fell into this story, and came to feel like I understood and knew the characters that bring this story to life. Churchland was able to use both the story and her art in tandem to connect me to the setting and characters both emotionally and mentally.  This was an impressive feat and one that Churchland seemingly pulled off effortlessly.

As I mentioned earlier, I had a very strong emotional connection to the story with Beast.  Colette is a character I found myself fretting and worrying over despite the fact that all she was doing for most of the comic was sculpting.  Sure, that's not exactly the most dangerous thing for a main character to be doing, but the situation, staying in a worn down house with perfect strangers, is a little sketchy. Additionally, Colette seems trapped by the job, with little contact with the outside world, which added to my worries. 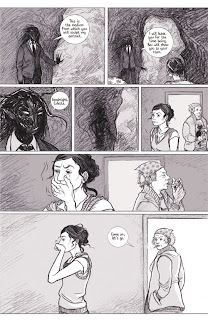 However, I fretted and worried most for Colette every time Beast himself entered the picture.  There was this underlying sense of mystery and danger, possibly even sexual danger, that just emanated from the page whenever Beast was around that I found pretty terrifying.  This sense of danger permeated the whole story and kept me wondering, and worrying how things would turn out in the end.

The entirety of Beast is created, written, drawn, lettered, and all that jazz, by Marian Churchland and for the sake of this story, I wouldn't have it any other way. Churchland clearly had a strong grasp of how she wanted the story to look and feel, and that's achieved thanks to the fact that Churchland is the one doing all the work.

Churchland does an expert job of making both the story and the art work hard for their money.  This is essentially a colorless work, but Churchland does use different monochromes that seem to match with the mood or setting of the scene. I liked this little technique a lot, as it often signaled a mood change, or a change in tension which got my anticipation and expectations working without my really noticing as I was reading.

The art in Beast is completely unlike what usually tickles my fancy, but I liked it all the same.  Churchland is very willing to let her art do a lot of the heavy lifting and story telling and I appreciated that.  In some cases, Churchland not only lets her art tell the story, but also leaves things open to interpretation which allows the reader to have their own unique experience with the story.

Beast is a very impressive graphic novel both in terms of story and art.  This is Churchland's debut and it is a powerful one.  This is one of those comics that is probably well below most folk's radar, but is deserving of much more credit and acclaim.  There's a really strong story here, and some absolutely beautiful art as well.  What is most impressive is how it all comes together to make a sum that is greater than its parts, all while being a story that will appeal to and entertain a wide audience.  Great Stuff.