The Hunter by Richard Stark 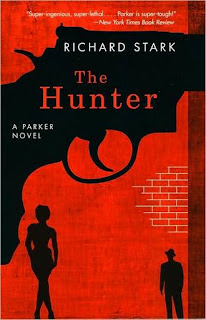 The Hunter is a novel that drips with style and takes no prisoners. This is Crime Noir at its finest. The novel follows the ruthless anti-hero Parker on his quest for payback. Parker is a crook, a heister, a thief, and he is damn good at his job. After a high paying job that had him working with some crooks he didn't fully trust, Parker planned to cross his partners, kill them, and take the money for himself. However, he wasn't expecting a double-cross, and he certainly wasn't expecting it to be his wife who did the crossing. Shot, and left for dead in a burning house, Parker survives, but is picked up by the police for vagrancy and given a six month sentence. Parker serves four, kills a guard and makes his escapes, heading toward New York to catch up with his wife and the man who took his money. Along the way Parker cheats, robs, forges, frauds and kills to get payback.

In The Hunter, Stark tells his story of gritty redemption from two points of view. Mainly we follow Parker, and his exploits as he seeks revenge, but for a brief part of the novel, Stark switches things up and we see events unfold through the eyes of Mal, the man who stole Parker's wife and money. Mal is meant to be the "bad-guy" but in an interesting twist, he is probably a better all around person than the anti-hero Parker. His motivations and machinations are all for a reason, and as I read, I thought I might have done the same had I been in Mal's shoes.

All of Stark's characters are well developed though Parker and Mal stood out as the most life-like. Stark has a knack for character building, giving them flaws and nuances that make them jump off the page. I had strong images in my head of what they were like, how their voices sounded, and even how their personalities led them to act or react given certain situations. I'm a fan of well written characters, and The Hunter definitely provides.

Where this novel really shines is in its style. Hardboiled only just barely begins to describe this book. Parker is one hard man, and he does some very bad things to get what he wants. These scenes are delivered by Stark with unapologetic realism. The man can not be accused of pulling his punches. There's a high degree of grit between these pages, and while that isn't for everyone, it only further endeared the novel to me. I loved Stark's prose style; it was spot on and fit perfectly for the story.

All in all, I really loved this novel. It was my first Richard Stark experience, but there are a slew of other Parker novels, and I see myself dipping back into this series again before too long. Despite being published in the early 60's, this book felt very fresh, and nothing felt too dated, nor was there a "cheese factor" that is often evident in dated genre material. I'm not exactly a mystery, or crime noir buff, but I'd say this stuff is gotta read material if that is your thing. If you are like me and every so often find yourself in need of a dark, gritty crime fix, I don't think you could do much better. The Hunter is awesome stuff.