Comic Review: It was the War of the Trenches 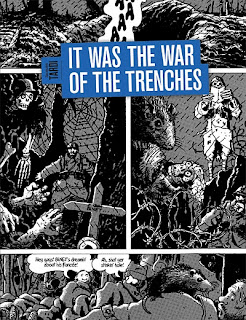 I had never heard of Jacques Tardi until his beautiful looking graphic novels started turning up at my local comic shop.  Tardi, a French graphic novelist, has only just recently made the jump across the Atlantic and had his works published here in the States.  As each piece has made its debut I've become increasingly more interested in his work, and the act of deciding which story to read first has become increasingly difficult as time goes by and more of his stuff hits shelves.

When I finally decided to purchase and read some Tardi, I settled on It was the War of the Trenches, mostly for the fact that I hadn't read any war comics in a while, and had recently dabbled in the other genres his works represent.  Once I started reading this tale of woe and suffering, I remembered why it had been so long since I'd last read a war comic; because they terrify, and depress me like no other.

Set during World War I, It was the War of the Trenches gives a grunt's eye view of the miserable existence that was trench warfare.  Through a series of vignettes Tardi gives the reader an indelible view of what it was like to be a lowly French soldier in one of the deadliest wars in all human history.  If going over the top, scouting enemy gun placements, or enemy artillery barrages didn't kill you, then friendly fire, starvation, or dysentery likely would.

Despite my aforementioned weak stomach for real-life war stories, I read It was the War of the Trenches in one spectacular and glorious sitting.  This graphic novel is so expertly researched, and beautifully drawn that I couldn't make myself put it down.  Tardi's artwork is amazing, and he captures the imagery of the war as well as any photograph.  In many ways, Tardi's art which features settings that look photo-realistic, and humans with a slight cartoonish look to them, reminded me of Joe Sacco's art, but it's more likely that Sacco's art is inspired and influenced by the work of Tardi, since he's been around longer.  Either way, Tardi's realistic depiction of places and spaces is as good as it gets, and gave me a strong sense of all the mud, blood and detritus of the trenches.

Tardi does something truly amazing with It was the War of the Trenches, with some words, and some lines on a page, he masterfully captures the brutality, stupidity, futility, cruelty, and reality of war.  This is a black and grim graphic novel, but it is expertly crafted and is a work I am proud to have classing up my bookshelf.  This is one of those graphic novels that is an essential for any lover of the comics medium.  I'm an instant fan of Jacques Tardi, and will be reading more from this genius of the comics medium as soon as I can get my hands on more of his stuff.

Email ThisBlogThis!Share to TwitterShare to FacebookShare to Pinterest
Labels: graphic novels, It was the War of the Trenches, Jacques Tardi

"...he masterfully captures the brutality, stupidity, futility, cruelty, and reality of war. This is a black and grim graphic novel, but it is expertly crafted and is a work I am proud to have classing up my bookshelf."

So eloquently said Ryan! War stories, of course, are dark and grim and when "expertly crafted" and relayed to a greater audience can definitely break your heart. I can only speak of the work done by Joe Sacco because that is all I have read in this genre: but his setting, his art, and the stories he captured when he was in Bosnia and Palestine touched me on a very different and more powerful level than any NPR story, news article, or photojournal/blog that I've read on those areas/issues. I'm excited to explore other artists/storytellers that use this medium to convey stories of war. Thank you for sharing, I'll have to look into this book!

Thanks for the kind comment Anonymous. I agree, Sacco is another graphic novelist who can really stir up the emotions.

I should add that Tardi doesn't just do war stories, in fact, out of his works that are available here in the US, I think this is his only war themed book. From what I can tell, he dabbles in a variety of genres...and all of them look cool.